Record high temperatures in the UK have revealed the remnants of an ornate 17th century garden design at Chatsworth in Derbyshire normally hidden from view.
Jul 21, 2022  |  Katie Hogg  |  Made News 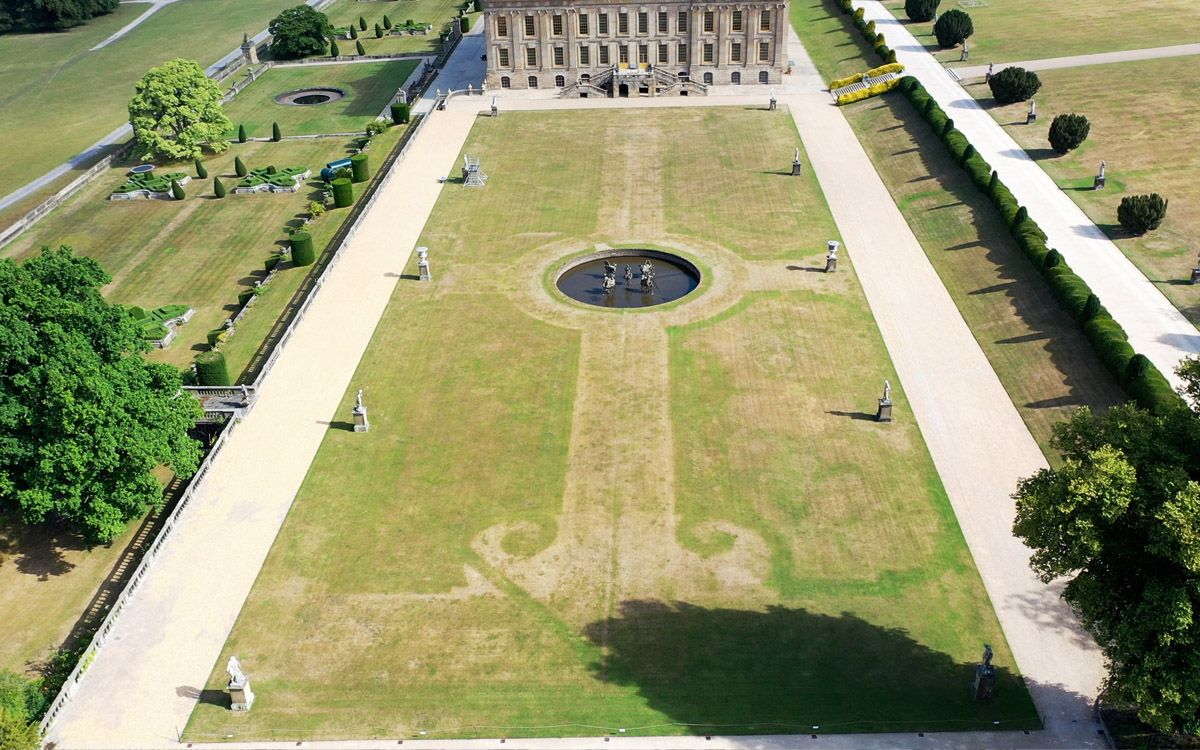 Once part of the Great Parterre, a level space in the garden occupied by an ornamental arrangement of flower beds and paths, clearly defined patterns can currently be seen by the naked eye under the South Lawn's scorched grass.

Dating back to 1699 the Great Parterre measured 473 by 227 feet and was intended to provide a suitable setting for the 1st Duke of Devonshire’s newly completed South Front of the house. It was covered over and replaced with a new design around 1730 but because the grass on the new lawn has shorter roots it burns more quickly, creating a contrast and temporarily revealing the older garden underneath.

Steve Porter, Head of Gardens and Landscape: “We can clearly see the intricate patterns of the historic garden at the moment. The current heatwave is causing us issues elsewhere in the garden but here it has revealed a hidden gem not enjoyed properly for nearly 300 years!.”

“We knew it was there but of course it’s normally a green lawn so everything is hidden. It is only revealed during periods of extreme heat, so climate change may make that more frequent in the years ahead. It will disappear again when temperatures drop and we get some rain but in the meantime it’s wonderful to get a glimpse back into the past.”

The historic garden is now covered by the South Lawn, part of the 105-acre garden at Chatsworth. Home to the Devonshire family for 16 generations, the garden is currently undergoing its biggest transformation for nearly 200 years with major changes to the Rock Garden and the creation of a new 15-acre area called Arcadia.

As well as the garden, Chatsworth’s publicly accessible 1000 acres of parkland is currently displaying Radical Horizons: The Art of Burning Man at Chatsworth, a large-scale exhibition of 12 sculptures until 1 October. Burning Man is a unique arts and cultural event that usually takes place annually in the Black Rock Desert in Nevada, USA, and made its UK debut at Chatsworth in April.

While Radical Horizons takes place in Chatsworth’s parkland, a second exhibition Living With Art We love: An exhibition presented by the Duke and Duchess of Devonshire is taking place inside the house from 26 March to 9 October

It features favourite items from their acquisitions over the past 40 years, few of which have been on public display, including paintings, sculpture and furniture, and including some works from the historic collection with a section dedicated to Lucian Freud in that artist’s centenary.