The Major & The Oak

The Major Oak of Sherwood Forest attracts hundreds of thousands of visitors every year. Reputedly a shelter for England’s most famous outlaw, Robin Hood, and his merry men, it has become an icon in its own right. Yet, if it was not for the work of retired local man Major Hayman Rooke, it may have been a different story…
Jan 1, 2021  |  Gemma-Louise King  |  Heritage 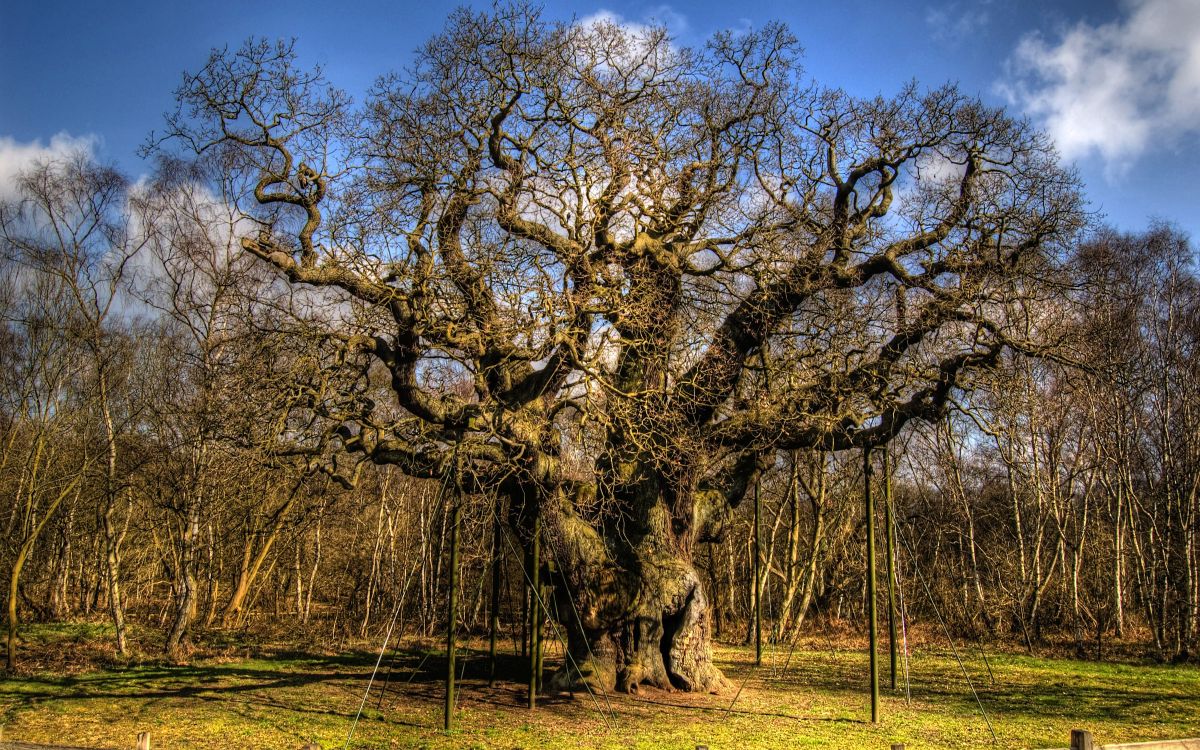 The Major Oak can be found at the heart of what was Birklands and Bilhaugh Woods - crown woods situated in the ‘High Forest’ area of Sherwood in Medieval times - which today form part of Sherwood Forest National Nature Reserve, Edwinstowe. Crowds flock to the 450-acre forest all year round eager to see this ancient and magnificent oak landmark. In fact such is its popularity that it was voted ‘Britain’s Favourite Tree’ in a 2002 national survey, and crowned ‘England’s Tree of the Year’ in the Woodland Trust’s public poll in 2014. At an estimated 23 tons, with a girth of 33 feet (10 metres) and a canopy of 92 feet (28 metres) and between 800 and 1000 years old, it is little wonder that The Major Oak is one of the main tourist attractions at Sherwood Forest.

Once known as Cockpen Tree - due to reputed use in housing fighting cocks - and at times Queen’s Oak, The Major Oak was finally named after Major Hayman Rooke, in recognition of his writings and love of Sherwood Forest.

Major Hayman Rooke, born on 20 February 1723, was a British soldier and antiquarian who became an antiquary on his retirement to Mansfield Woodhouse following a modest military career in the army, which saw him achieve rank of major. Whilst little is known of his private life, he was associated with the Roman finds around Mansfield Woodhouse and for pioneering archaeology across the country of Nottinghamshire. Impressively, he had no formal training and yet was well versed in archaeological fields and even contributed frequently to the journal Archaeologia between 1776 and 1796.

During the spring of 1786 his most significant discovery was on the land west of Mansfield Woodhouse where he had noticed some Roman bricks and small stones which the locals called ‘fairy pavements’. From here he discovered the remains of a Roman Villa situated in the parish’s north field. A small scale model of this villa has since been made and can be seen at Mansfield Museum.
In addition to covering material on the Romans he also wrote about medieval churches and local estates such as Bolsover, Thoresby, Haddon Hall and Welbeck. Rooke took a particular interest in local natural history, and was especially keen on the nearby old oak trees, using his skills as an illustrator to sketch many examples.

It was this interest in trees that led the Major to become friendly with the Duke of Portland, who agreed to fund research Into the old oak trees around his estate. By 1790 the Major had published a book called ‘Description of Remarkable Oaks in Welbeck Park’ - a testament to his passion for the woodlands - once again evidenced when he published a pamphlet in 1799 called ‘A sketch of the ancient and present state of Sherwood Forest’ containing many excellent illustrations of the trees, all created himself. 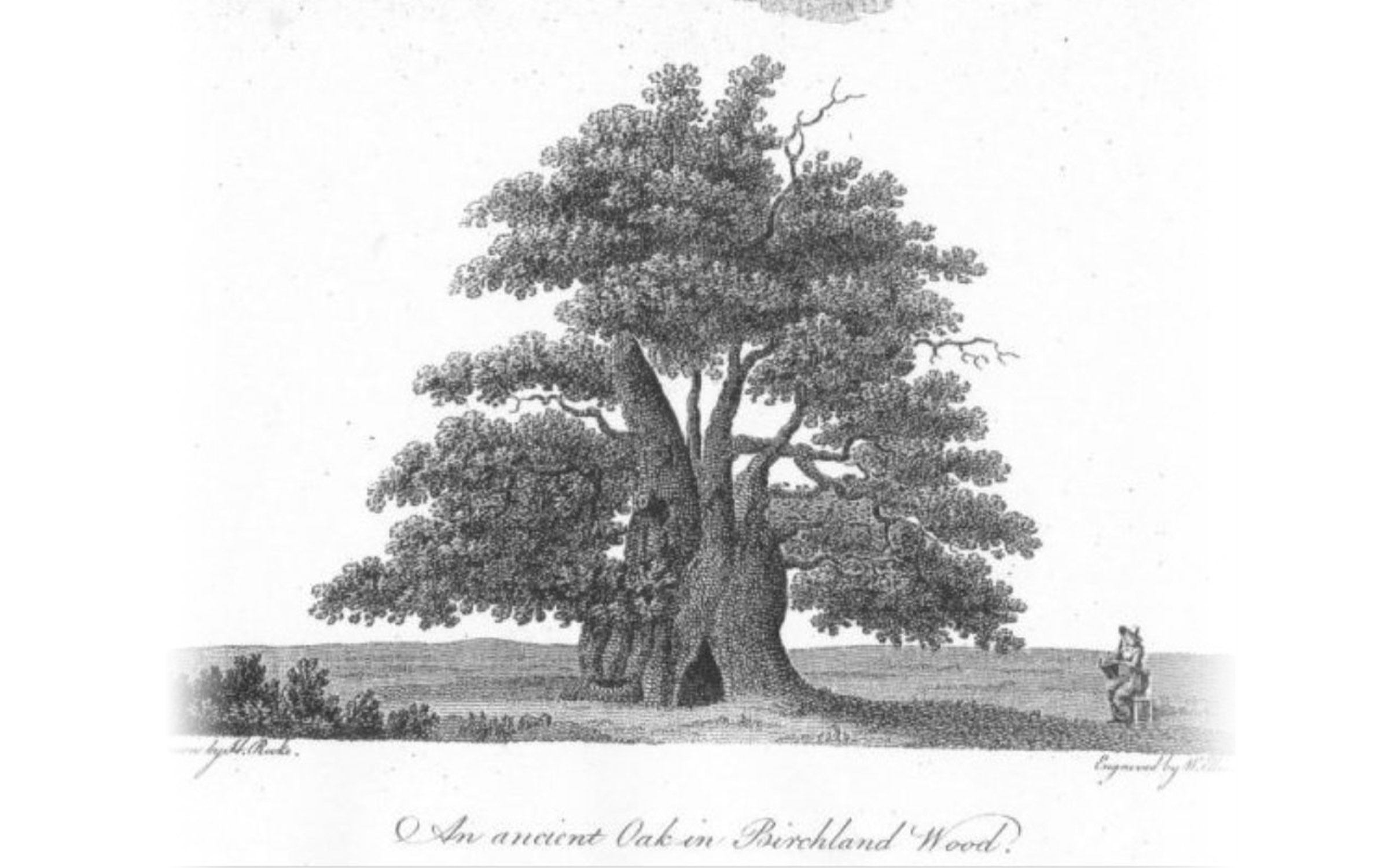 One of the first trees mentioned in Rooke’s book was the Duke’s Walking Stick, followed by the Green Dale Oak, perhaps the most discussed in the book, and by far the most famous tree on he Duke’s estate. Towards the end of the book he introduces the reader to a ‘curious ancient oak’. We can all guess to which specimen he alluded. Now of course it is known as The Major Oak but interestingly he didn’t actually give a name to his illustration, in contrast to the other trees features in the book. It was simply titled ‘An Ancient Oak in Birchland Wood’.

The Major Oak is indeed curiously shaped. There are several theories as to how it became so huge and oddly shaped. Some same it may be several trees that fused together as saplings, or the tree could have been pollarded. (Pollarding is a system of tree management that enabled foresters to grow more than one crop of timber from a single tree, causing the trunk to grow large and thick.) However, there is only limited evidence to support this.

Some say that the Major often relaxed under the tree leading to locals to refer to it fondly as ‘The Major’s Oak’, whereas others suggest that it became a tourist attraction in Victorian times after readers of his book began visiting the area, and without a name to the drawing it was simply identified by his fans as ‘The Major’s Oak’. Over time this curious wonder of nature came to be known as The Major Oak.

It has been suggested that had Rooke labelled the tree initially it would not have aroused the curiosity that has ever since, but by all folklore accounts this was a tree that would never have gone unnoticed, and will always be cherished as Robin Hood’s hideout.

Rooke died on 18 September 1806 and is buried in the chancel of St Edmund's church in Mansfield Woodhouse. His legacy and passion for ancient trees live on in the tree’s name, and whenever our descendants talk of Robin Hood and Sherwood Forest.