up against the hurricane

Worksop’s very own sports star Nicola Hopewell’s career sure does pack a punch, with a string of boxing titles under her belt, and a determination to become world champion in 2022. Made caught up with the flyweight ace, for a quick round…
Mar 27, 2022  |  Katie Hogg  |  Sport 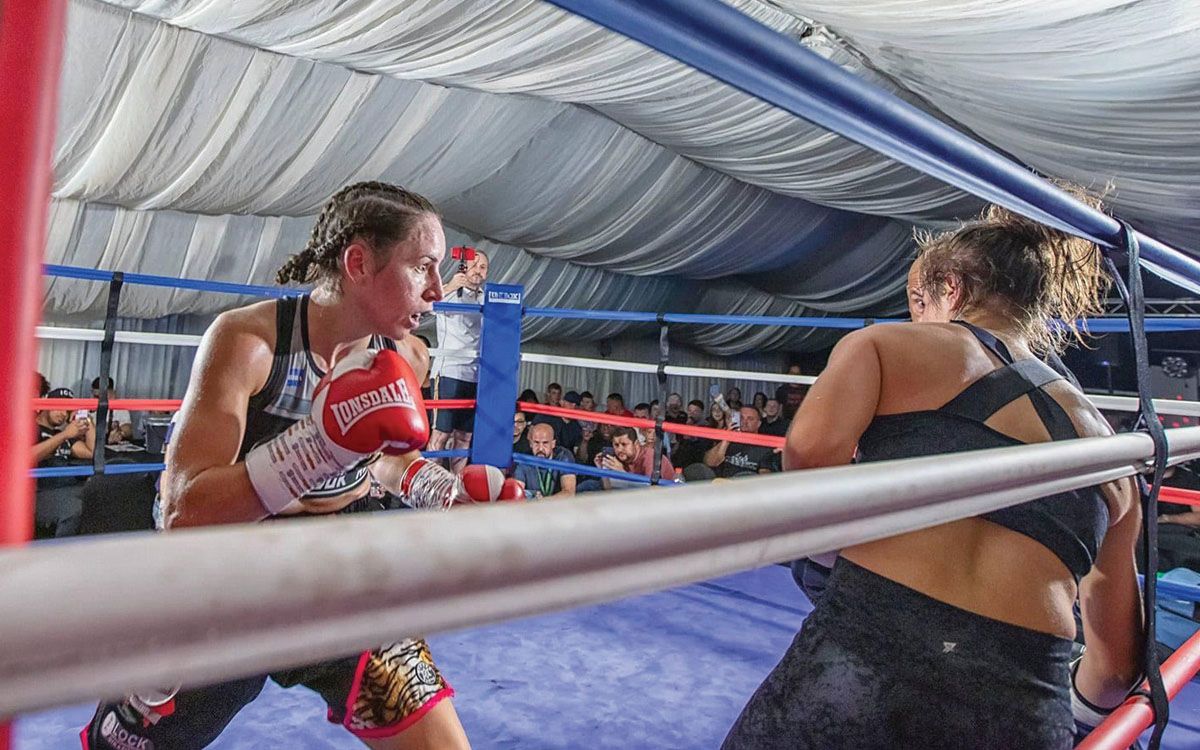 Known as the Hurricane - a nickname that arose from her signature quick flurry style - Nicola is a professional boxer who currently holds the Professional Boxing Council International title and World Boxing League European title. No mean feat for someone who only turned pro in 2019 – impressive indeed. But no surprise, with the signs there even at amateur level with Nicola having won the National Amateur Development Championship, East Midlands Flyweight title belt and the Central England flyweight title, in addition to a string of other gold and silver medals at various tournaments.

When we chat to Nicola, we realise just how passionate she is about continuing to develop on the professional circuit and to reach her goal of winning the World Boxing League World title. Despite a challenging 2021, that saw several fights called off or rearranged, due to the pandemic, Nicola was still able to enjoy several fights, with three wins and no losses, although it was at times frustrating when fights were called off last minute, particularly after periods of intense training.

She’s remaining pretty upbeat though for 2022 and is looking forward to hearing the fights she will be in, and of course upping the ante with the training where she can. We’re pretty sure she couldn’t train much harder than she already does, with a two-hour gym session or run six days a week, and both combined when in the run-up to a fight. It’s a gruelling fitness regime, but one that is perhaps well suited to her. At school, Nicola would take part in everything; hockey, netball, cross country, you name it. And whilst she does follow a clean diet, more stringent during higher training times, she remains surprisingly relaxed about her diet and enjoying the food she likes.

We were curious to see, in the seven years she has been boxing, what her highlights have been, other than her impressive wins of course.

“I was lucky enough to be on the England Talent Pathway for 12 months where I travelled around the country training with the England coaches”, Nicola explained.

We also wondered how it all began and what first got her into the ring in her early 20s.

“I remember sitting in a hotel room with some friends whilst on holiday and watching Nicola Adams for team GB at the Olympics, and just being blow away with her. I had never boxed, although I was enjoying boxercise, and something just made me think I wanted to give it a go.

“I was 22 at this point. I’d always been sporty and had been actually really heavily into ballroom dancing from the age of 5 to 16 but boxing never cropped up. It’s funny how things turn out!”

That pivotal moment watching Nicola Adams led to her starting the academy classes at Boyle's Pro Boxing in Worksop, which crucially became the place where she learned her skills and started sparring. Within six months she was on the club’s show and had won a fight with a third-round stoppage. From there it was clear that she had an appetite to win and to keep going up a level.

“I had 32 amateur fights and I boxed all the best people, including GB squad members but it was becoming increasingly less challenging and exciting as I was boxing the same people over and over again, as the pool is not massive.

“By 2019 we already had one boy from the gym turn pro successfully and my coach Chris Boyle suggested to me that I should consider turning pro myself.  I didn't take much persuading!

“For me, it’s actually turning pro, more so than my wins, that I call my biggest achievement,” she explains. “I was very scared of taking off the head guard and taking it to the next level, but once I’d broken that fear, I was fine.”

With the likes of both Nicolas (Adams and Hopewell) making waves, there has been a turn of attention towards women’s boxing with more girls showing an interest in taking it up, and more interest across the sport in including women’s fights.

Nicola explained that there was still a long way to go in televised coverage and publicity, and what the sport really needs is the opportunity to have female headliners rather than women just appearing on the bill at events, but it is progressing, and people are really embracing and getting behind the sport.

“It has grown quite a lot with more woman boxing now than when I started out and so many of them turning professional,” she explains. “It has really taken off in many countries, which is brilliant.”

Back in early 2021, Nicola made history when she was part of Europe's first all-female boxing bill in Aberdeen.

“This was great progress for boxing and the large the amount of people who watched it on the TV, gave us all a boost. It was encouraging to get so much positive feedback,” she said. ”I also headlined and it was an incredible feeling.”

When she isn’t training or competing, Nicola likes to spend time at the pub with her friends or enjoy a long leisurely bath. Her mother is an avid cyclist so they will often go out together with Nicola running alongside as she cycles. She also works full-time in retail and is used to juggling her training with work. Fortunately, her employers at Wilko are really supportive and she is able to book a few days off before any fights to ensure she is prepared, but she hopes one day to switch to part-time and spend more time in sport.

In the past couple of years she has also been taking in part at local school Q&A sessions, as an inspirational guest to the schoolchildren, and on one occasion she also joined in a PE class with them, something she loved.

“I’ve been invited back and would definitely like to do more of this. It’s great to be a part of kid’s development and to hopefully give them a bit of inspiration not just for boxing but for achieving what they want to in any field of life.”

With a busy 2022 shaping up and armed with plenty of grit, we can see Nicola going far as she works towards a World title. She is also hoping to attract some extra sponsorship having lost some due to Covid in 2021. Anyone interested in sponsoring her can contact Nicola directly on: This email address is being protected from spambots. You need JavaScript enabled to view it.

As we finished up, we asked Nicola what her advice would be to other young girls interested in boxing.

“I’d say not to worry if you are the only girl in the gym boxing. I was. But others soon join. Don’t be scared, just try it out. You could end up loving it! And if you want inspiration look at the girls who have reached the Olympics. I did.”